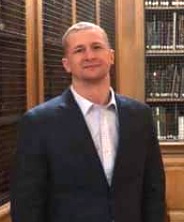 However, for some reason the Lutheran faith never took hold of my heart in the way that I was seeking. Perhaps it was the crime and punishment view of salvation that is so common in Protestantism, or perhaps it was the lack of connection to the ancient past and the traditions of the early church, of Christ’s church. While feeling connected to the Lutheran church culturally, I felt disconnected from it spiritually. From my late teens and into adulthood I began to study other philosophies and religions, searching for spiritual truth. Finding nothing that I found to contain the fullness of truth, I began to drift into agnosticism. I began to think that my life would run its course in agnosticism, and while trying to stay positive about it, it was quite a dismal feeling.

By the grace of God, about two years ago I ran across some information on Eastern Orthodoxy, a faith that I was aware of, but not well acquainted with. Shortly thereafter I attended a service and was immediately taken in by the beauty of the worship with its ancient Liturgy, icons, candles, and incense. While it was beauty that drew me in, it was the theology which really caught my attention. When I began studying the Eastern Orthodox doctrine of Theosis, I immediately knew in my heart that this was the real fullness of truth which I was seeking. Likewise, the Eastern Orthodox views on grace, salvation, and tradition all rang true to me both intellectually and instinctively. I knew that after many years of searching I had finally found the one true religion.

About a year ago I attended the Pascha vigil at Saint Constantine and Helen and then began to attend the Divine Liturgy semi-regularly. I eventually attended an inquirers class at the church and shortly thereafter began to study Orthodox theology under the direction of Fr. Ninos Oshaana, eventually entering into a Catechism. My Catechism culminated in my baptism this past Holy Saturday. Fr. Ninos has been an excellent teacher throughout the Catechism as he has guided my readings and prayer life the whole way through with great attentiveness.

While my Catechism may be complete, my journey into the Orthodox life is far from over. As Orthodoxy holds the fullness of truth and the apostolic succession from the original church of Christ and his apostles, the spiritual treasures it contains are more than one can absorb in a short lifetime. Luckily, even if I live a very long life I will never run out of aids to spiritual growth as Holy Scripture, the writings of the Church Fathers, the lives of the Saints and Martyrs, Liturgical worship, prayer, fasting, and alms should provide me guidance for the rest of my life. I look forward to growing in my faith inside Christ’s church.