“Rejoice, unfading rose.
Rejoice, the only one who budded forth the unfading apple.
Rejoice, birth-giver of the aromatic balm of the King of all.
Rejoice, O Bride unwedded, the world’s salvation.” 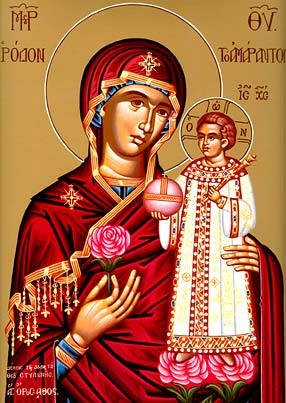 The Akathist Hymn is a profound, devotional poem, which sings the praises of the Holy Mother and Ever-Virgin Mary. It is one of the most beloved services in the Orthodox Church. It was composed in the imperial city of Constantinople, “the city of the Virgin,” by St. Romanos the Melodist, who reposed in the year 556. The Akathist Hymn has proven so popular in the liturgical life of the Church that many other hymns have been written following its format. These include Akathists to Our Lord Jesus Christ, to the Cross, and to many Saints.

The Akathist hymn consists of praises directed to the Mother of God, beginning with the salutation of the Archangel Gabriel: “Rejoice.” As the hymn is chanted all of the events related to our Lord’s Incarnation pass before us for our contemplation. The Archangel Gabriel marvels at the Divine self-emptying and the renewal of creation which will occur when Christ comes to dwell in the Virgin’s womb. The unborn John the Baptist prophetically rejoices. The shepherds recognize Christ as a blameless Lamb, and rejoice that in the Virgin “the things of earth join chorus with the heavens.” The pagan Magi following the light of the star, praise Her for revealing the light of the world.

The word “akathistos” means “not sitting,” i.e., standing; normally all participants stand while it is being prayed. The hymn is comprised of 24 stanzas, arranged in an acrostic following the Greek alphabet. The stanzas alternate between long and short. Each short stanza is written in prose and ends with the singing of “Alleluia.” Each longer stanza ends with the refrain: “Rejoice, O Bride Unwedded.”

The first part of the hymn is about the Annunciation to the Virgin Mary by the Angel. It describes Mary’s surprise at the news, her visit to her mother and Joseph’s doubts as to her innocence. The second part is about the birth of Christ, the worship of the Shepherds and Magi, the flight to Egypt and the visit to Saint Simeon in the Temple. In the third part the hymn directs our attention to the renewal of the world by Christ’s coming, and the amazement of the Angels and the wise men at the sight of the Incarnation of God’s Son. The fourth and the last part is once more a lyric and rhetorical appraisal of Virgin Mary, whom the poet adorns with the most beautiful of adjectives asking her to accept his poetical offering and to intercede for the salvation of human race from the earthly sin.

On the first four Fridays of Great Lent during the service of the Small Compline the Akathist Hymn is observed in the following order:

On the first Friday, the priest reads the Gospel of the day (John 15:1-7). On the fifth Friday of Great Lent the complete service is observed in the following order: